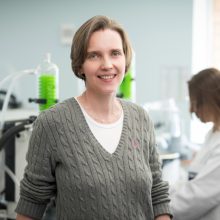 A PhD graduate in physical chemistry from Göttingen University, Germany, Leonie worked at Sartorius AG, Göttingen, from 1998 to 2001 developing polyethersulfone membranes (Sartopore® 2). Leonie joined the Centre for Advanced Macromolecular Design at the University of New South Wales in 2001 establishing her research in controlled living polymerisation with a special focus on surface modification and particle synthesis as well as gamma- and UV-initiated RAFT polymerisation. Moving back to Germany in 2008, she worked as a scientist at the Fraunhofer Institute for Chemical Technology in the Department of Environmental Engineering which marks the start of her interest and research into sustainable polymers and environmental technologies. In 2011, she joined the Karlsruhe Institute of Technology (KIT), where she led the Soft Matter Materials Laboratory of the Helmholtz-Institute of Biological Interfaces, as well as being the Deputy Head for the Department for Novel Polymers and Biomaterials at the Institute of Functional Interfaces. She also co-established and served as a board member of a DFG Centre of Excellence (‘Molecular Structuring of Soft Matter’) at KIT. Following a period as an Adjunct Professor and collaborator with QUT, she moved to QUT in early 2017 and was a founding investigator and key contributor to the establishment of QUT’s Soft Matter Materials Laboratory, now one of the world’s premier macromolecular laboratories. In 2017, she became Enabling Platform Leader for ‘Manufacturing with Advanced Materials’ at QUT’s Institute for Future Environments and is also a Principal Research Fellow at the Central Analytical Research Facility (CARF). In 2020, Leonie became the inaugural Director of QUT’s Centre for a Waste-Free World, leading a transdisciplinary research team (law, business, creative industries, science and engineering, health and education) which develops technical solutions in parallel with social science knowledge to catalyse change and business to enhance the circular economy and eliminate waste. So far, she has attracted over $3.5M in independent funding from the German Research Council, the Fraunhofer Society and Helmholtz Association, the Australian Research Council, European Union as well as the private sector. She also raised funding for collaborative research such as the DFG Centre of Excellence and Australian Cooperative Research Centres.